Around the world, humans are struggling to ignore thousands of years of bio-social convention and avoid touching each other. What are the implications for how we conduct business?

Various business-related activities and customs we took for granted could be on the chopping board as a result of the fallout from the COVID-19 outbreak. From the humble handshake sealing a deal to business conferences and even business flights themselves, no one knows when or if these will return.

In the short term, these once taken-for-granted business norms are compromised as a result of social distancing restrictions. But they may be fatally imperilled in the longer term due to how technology has stepped in to fill the gaps—while doing such a good job—during the largest work-at-home experiment the world has ever seen.

Employees forced to work at home have found that they can still perform adequately thanks to video conferencing platforms such as Zoom and the likes of Slack and Microsoft’s Teams product. Commuters are left considering if going into the office is so vital especially when factoring in COVID-related risks presented by the likes of the London Underground.

Meanwhile, companies have good reason to reassess why they fork out small fortunes to pay for business flights around the world when virtual business meetings in lieu appear to be producing the required results.

A paradigm shift is occurring in relation to the culture of presenteeism that has traditionally pervaded office life and doing business.

But—and it’s a big but—at the same time, while communication technology has undoubtedly provided salvation during the lockdown, as any science-fiction fan knows, overreliance on technology’s tools can diminish what makes us most human. It can also generate unforeseen problems. Beyond the widely reported security and privacy concerns, there are plenty of reasons to be wary of replacement technology, and hence, not give up too readily the old ways of doing business.

“Touch matters for many reasons,” says Arthur Markman, a professor in the department of psychology at the University of Texas at Austin. “People make rapid judgements about other people based on just a snippet of interaction with them. That can include a handshake, but also facial expression, a smile and the way people are dressed.”

More than two decades of research into so-called ‘thin-slicing methodology’, which is the theory that humans make a reasonably accurate assessment of a person from observing just a few seconds – or a ‘thin slice’ – of their behaviour, has reinforced the value of face-to-face encounters occurring in the flesh. Speed dating is an example of thin-slicing in action. As a result of this human propensity, just a handshake can be all that it takes to create a memorable first impression from which far greater things flow: ranging from a new career path to the completion of a multi-billion-dollar deal.

Giving up on handshakes, Markman explains, could eliminate a source of seemingly extraneous information that affects how we judge others. While there are other points of information to use to make judgements, the handshake remains a particularly effective conveyor.

Humans have evolved to be deeply social, tactile-orientated animals, hence our hands have such prominence in our interactions.

There are various ideas about the origin of the handshake. It may have originated in ancient Greece as a symbol of peace between two people by showing that neither person was carrying a weapon. Or the shaking gesture of the handshake may have started in Medieval Europe, when knights would shake the hand of others in an attempt to shake loose any hidden weapons. The Quakers are credited with popularising the handshake after they deemed it to be more egalitarian than bowing.

As the 20th century progressed, the gesture evolved into a near universal and unassailable symbol of greeting, particularly among business professionals. Scientific studies of the ritual have identified how a good handshake activates the same part of the brain that processes other types of reward stimulus such as good food, drink and even sex.

But the COVID outbreak has made the handshake verboten – possibly permanently. Fortunately, humans are highly adaptable – hence the emergence of the elbow tap -and good at leveraging available technology to work for the situation. Hence the current boom in video conferencing.

“Change gets deferred until one day something happens and suddenly everything that was familiar is broken,” says Phil Wainewright, a blogger and analyst on cloud computing and the transformation of 21st century business through digital technology. “At a stroke, all those fixes that have been waiting on the side-lines get fast-tracked to the mainstream.”

COVID-19 means “we are in one of those exceptional moments,” Wainewright says, adding that “in adjusting to the new normal we are learning new habits and skills that we won’t want to unlearn.”

This means, he says, that remote digital teamwork will become the norm and no longer appear the second-best choice as it once did when work was centred on the office and working from home was perceived dismissively as slacking off. Employees are finding how to keep their work in sync with other members of a distributed team and how to balance work deadlines with domestic demands.

“What used to be the fringe community of remote and nomadic workers is now, very suddenly, all of us,” says Fred Schmidt, a global serial entrepreneur working between Austin, Los Angeles and London. “And that’s a game changer that will have profound and lasting impact on every aspect of our Western working and social worlds.”

Similarly, Wainewright explains, virtual conferences that have been around since the mid-2000s but previously never took off, now find themselves “all the rage” because travel and large gatherings have been abruptly vetoed.

“Now that everyone has an incentive to make a success of virtual events—because there’s no alternative—huge amounts of talent, creativity and funding are suddenly being devoted to finding out what works best,” Wainewright says.

He argues that once there have been several significant successes illustrating how virtual conferences can replicate much of the experience of a physical event – whilst mitigating a large part of the cost and hassle – there won’t be the same appetite for a full return to the old model.

Other long term changes being discussed by commentators include the adoption of automation and artificial intelligence, and of industry-specific online training platforms as education in general goes online and on-demand.

But, as we work and communicate online even more during the lockdown, people are noticing problems with the likes of video conferencing, indicating it isn’t the unqualified blessing initially assumed.

A recent New York Times article entitled ‘Why Zoom is Terrible’ notes how experts increasingly agree that “the distortions and delays inherent in video communications can end up making you feel isolated, anxious and disconnected (or more than you were already).”

This, the article notes, tallies with previous research on interpreters at the United Nations and at European Union institutions who ‘reported similar feelings of burnout, fogginess and alienation when translating proceedings via video feed.’

“Our access to technology is proving to be the glue that is keeping us all connected and many parts of business operating,” Schmidt says. “But will our 2D existence replace our 3D one? Absolutely not. Humans are a naturally grouping species. For the most part, we long to be together—to seal a business deal with a simple handshake and a square look in the eye.”

When it comes to more large-scale interactions such as business conferences, Markman cautions how their demise would cut down on the number of opportunities for people to connect with others through the valuable commodity that is coincidence.

“A significant value of conferences is the chance for people to meet new people that are outside of their social network and to connect over topics of common interest,” Markman says. “Without that mixing, existing social networks will have greater power. That can make it harder for people who are not already well-connected to break into those social networks.”

This, he explains, could lead to a “rich-get-richer” effect: those who are already well connected within a business social network increase in stature relative to those who are not. “That means that people on the outside of an industry will have to find new ways to break into those industries.”

Similarly, those business flights may still be worth it. Our ability to thin slice – and which enables us to tackle highly complex situations speedily—largely depends on being on the ground and interacting directly with people.

In his book “The Power of Thinking Without Thinking,” American writer Malcolm Gladwell discusses how “many different professions and disciplines have a word to describe the particular gift of reading deeply into the narrowest slivers of experience.” Gladwell gives the example of the military where brilliant generals are said to possess ‘coup d’oeil’ which, translated from the French, means ‘power of the glance’ – the ability to immediately see and make sense of the battlefield.

Despite the potential pitfalls of reducing physical interaction the general consensus is that the lockdown fallout will inevitably infuse technology more broadly and deeply into almost every aspect of our lives. And it’s agreed this is by no means necessarily a bad thing. For example, communication technology will help us mitigate – and perhaps even defeat – COVID-19 by tracking public health threats, spreading the word about risks and precautions, and speeding the sharing of knowledge in the hunt for a vaccine.

Similarly, business has much to gain by embracing these technologies. Wainewright notes the previously uneven trajectory of the relationship between emerging technology and business. Initially, technology lacked the necessary maturity. Even when the technology improved, the time was never right, and then when the time had finally come, the business case was never compelling enough.

“Now the business case has arrived it is demanding immediate action,” Wainewright says. “The world has changed and however much we may yearn for a return to what we knew as normality, all of these fringe ways of working have now become the new mainstream.”

Or have they? The COVID-19 experience has proven unchartered territory. It will remain so as the lockdown is eased, and the world figures out how to proceed.

“Let’s be honest here; we all still yearn to see our family, friends, colleagues and co-workers again,” Schmidt says. “Ask anyone – virtual beers over Zoom is no adequate substitute for pints with your mates at the local pub. We will return to that proverbial handshake to affirm our human connection. We may be wearing gloves for a while, and it may take a year or two, but the handshake will be back.” 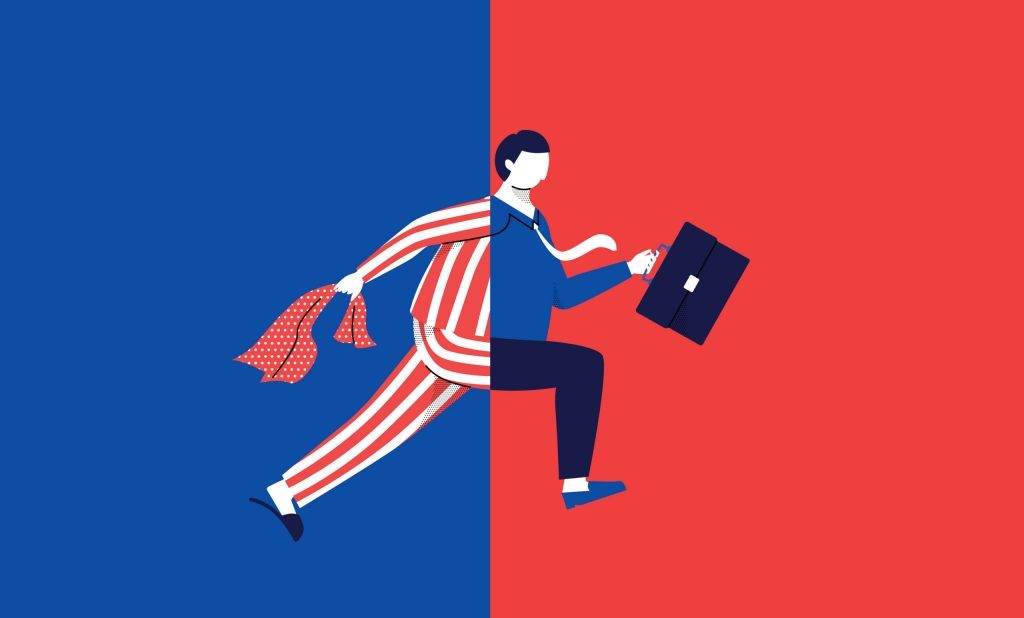 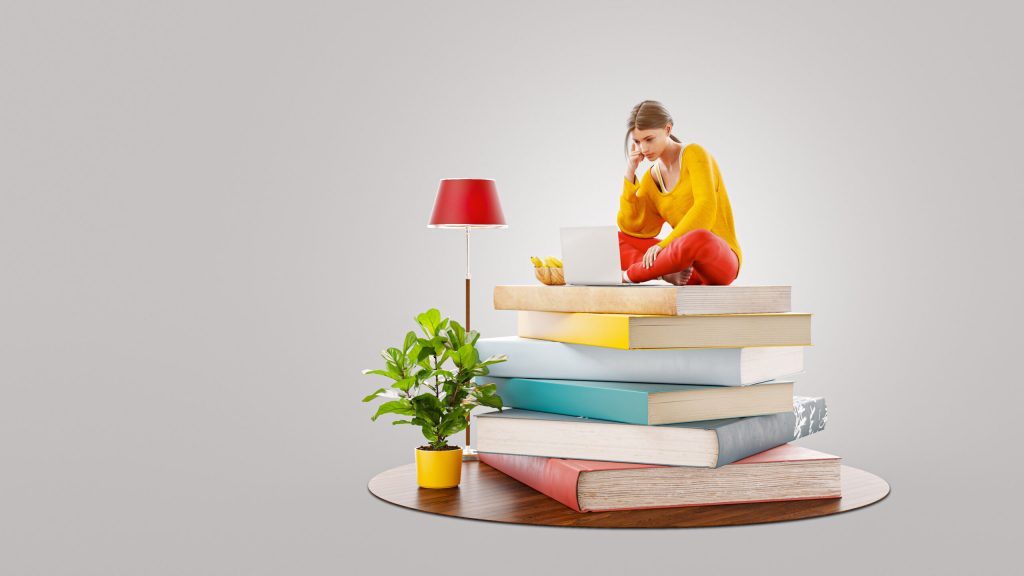 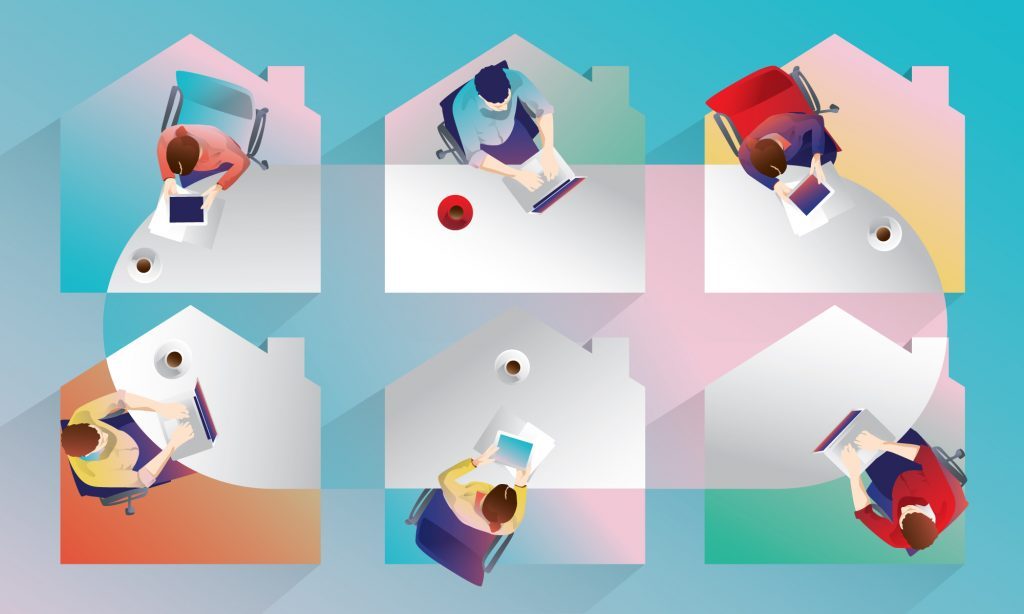