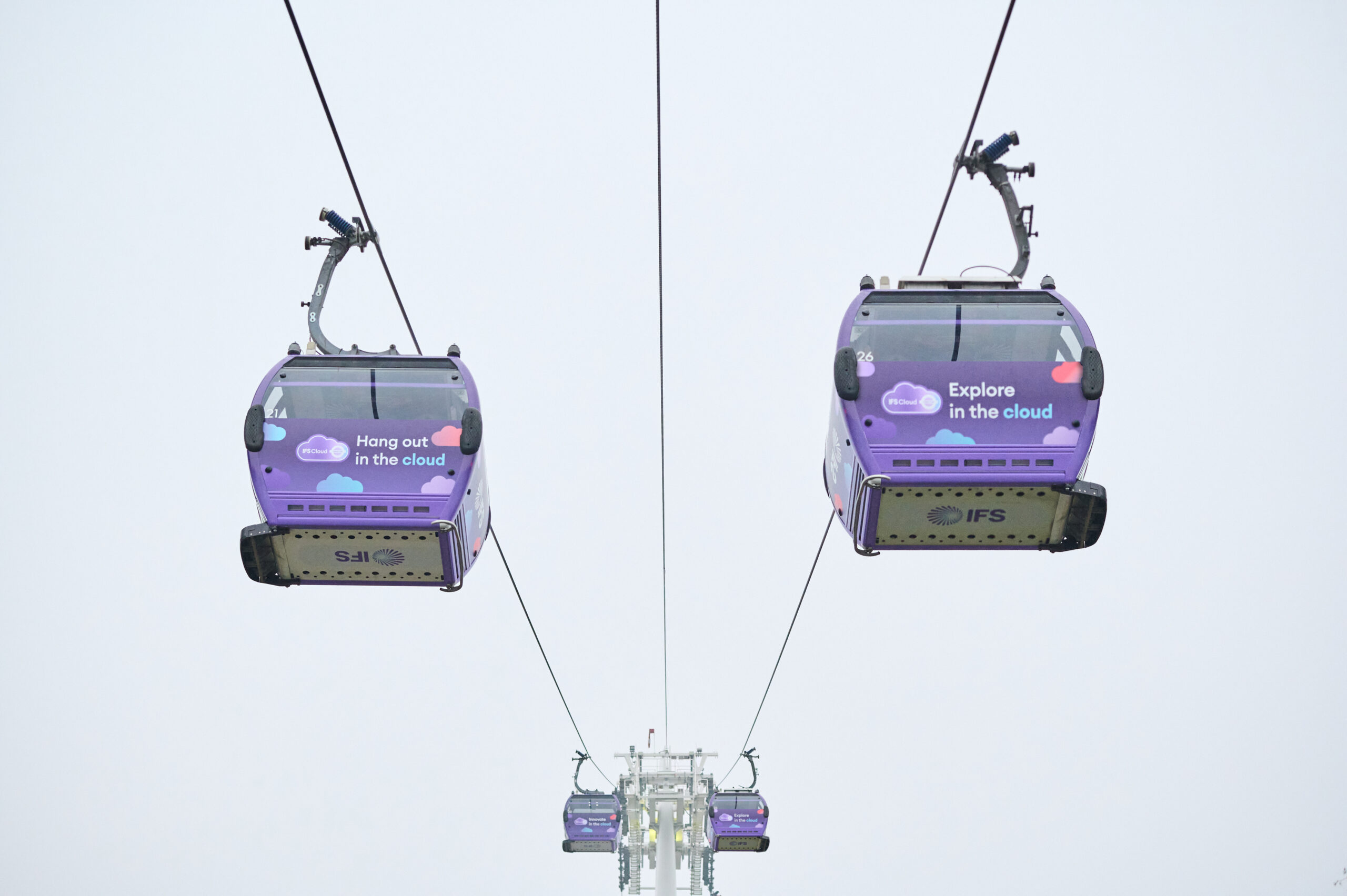 ERP Today attended last Thursday’s launch of the makeover at London City Hall, which stands across from the newly renamed IFS Cloud Royal Docks terminal for the cable car. IFS is taking over from the airline Emirates as sponsors for the service, which takes sky-high passengers across the Thames to Greenwich Peninsula. The route was first launched in 2012 under the name Emirates Air Line, with a very different landscape forming in the intervening years. For one thing, airlines are certainly reeling from the pandemic and its effects on travel.

“The market’s changed; that was the feedback before we went out to tender,” adds Josh Crompton, head of the IFS Cloud Cable Car at Transport for London (TfL). “Also, everyone’s weary from the financial climate, weary about committing to longer sponsorships.”

Not so weary were the various tech companies and app brands sniffing around the sponsorship, according to Crompton. IFS eventually won out, signing up for a five-year contract worth up to £2.1m. Who in 2012 could have predicted a Cloud company taking over a London landmark?

For Oliver Pilgerstorfer, chief marketing officer at IFS, the TfL deal fits in with a trend that many companies weren’t talking about a decade ago: ESG.

“It was so important to find something that was sustainable,” as he tells ERP Today. “Many of our customers are coming to us saying ‘we’re asset-intensive and very industrial by nature, but we know we have to improve our sustainability.’ (IFS) has made a huge investment to what we call our Sustainability Hub, which lets companies monitor, manage and change their operations to become more sustainable.

“Would we go to a football team or a stadium rebrand, simply sticking a sticker on the side of an asset? (Instead) I very much wanted something that was green.”

There is an argument that urban cable cars are greener than other modes of city transport. But the real color in trend at the moment is undoubtedly purple, with IFS’ signature colors nicely matching with those of the Elizabeth Line, which can be found serving commuters just down the road from Royal Docks, at Custom House station.

Where 2012 had the London Olympics to gild the arrival of the London Cable Car, 2022’s closest comparison is the recent launch of the Elizabeth Line, with next month seeing the entire route finally joined up in the middle. The lack of an Olympiad-level event is probably one reason – besides uneven ridership – why the Swedish software player is paying 88 percent less than Emirates did in 2012 with its 10-year-long contract worth £36m; a two-year break clause is also included in the new deal.

Events on a smaller level though are what’s exciting IFS’ Pilgerstorfer, who points out that next to Custom House station is ExCeL London, a popular convention centre of choice for B2B executives. Those execs, he believes, would find the IFS Cloud Cable Car a handy choice of transport for hopping over the Thames to their accommodation, especially with, in his experience, decent hotel space near ExCel often filling up quickly.

Another B2B connection is amongst the commuters who take the cable car for work, because in the eyes of IFS and TfL, the ride isn’t just another London tourist attraction.

“We want everybody to gravitate towards taking the cable car,” says Pilgerstorfer as we share a cabin ride over London Docklands. “Consumers who want to do a TikTok video, and equally for those business commuters we want to show how we’re helping…(customers) use our software in the Cloud.”

On the day we chat, all the cars have been rebranded from the outside with slogans such as ‘Selfie in the cloud’ and ‘Create in the cloud’ (a small C, tech watchers will notice). Inside the cabins, purple abounds; on the day of launch, I was able to take one of the two cars which had been fully rebranded from within, with the rest overhauled over the next few days.

Outside of the car, I spot fellow travelers: families of tourists; a poker-faced hipster-slash-commuter; a salaryman in a trenchcoat, talking on the phone about B2B matters, one would wager.

The views, of course, are what catch most of the attention, and the whole experience is a nicely epic bit of promotion for IFS, a brand that’s been steadily becoming more epic itself in the enterprise field.

“Our software revenue has been growing way over 20 percent year-on-year,” Pilgerstorfer says. “It’s testament to the fact that the business has been super-focused, and now we’re just taking that next step so we get bigger awareness, and we’re part of the consideration when people are looking for a new technology platform.”

You can’t get bigger awareness than having your name out there as part of the infrastructure in one of the world’s biggest cities, emblazoned over all the London Tube maps. Here IFS will jostle for space with another Swedish-headquartered brand, IKEA, which recently became official sponsor of the London Tube map.

Pilgerstorfer laughs when I bring up this curious case of Swedish serendipity.

“Clearly our heritage is Swedish, but we don’t actually look at ourselves as a Swedish brand. We’re really global in our footprint. (But) being alongside a brand such as IKEA which is so well-known is only a good thing.”

Move over the UAE and related controversies; in this changed landscape, the UK is flying in the clouds – and Cloud – towards Northern Europe. 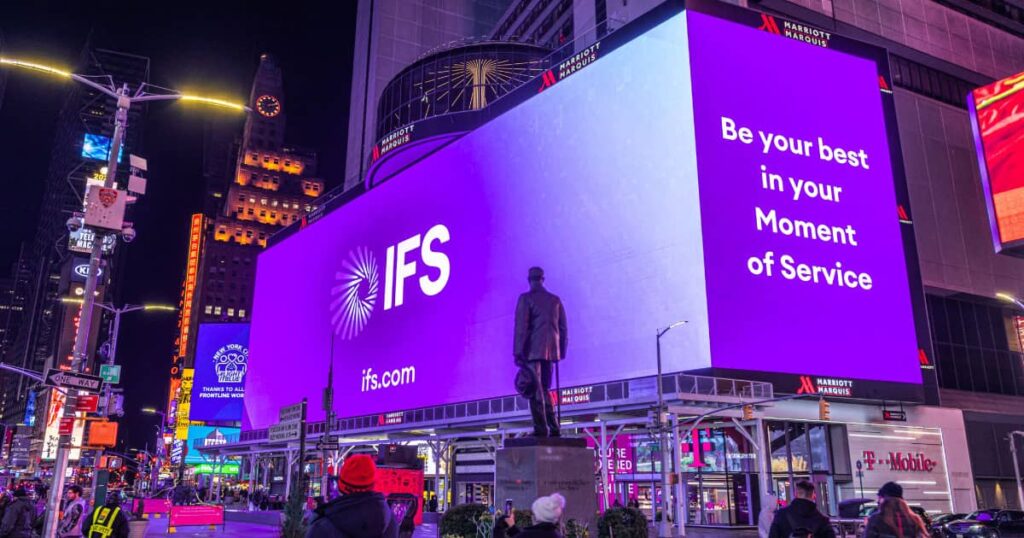